August brought about some pretty sweeping changes. Kids are going back to school and I’ve found myself stepping back from some commitments.

Running out of spoons

This month I ran out of spoons. Neck-deep into starting a company and feeling that ambient stress, I realized I’m running out of available bandwidth. This manifests in tiredness, grumpiness, back pain, etc. I made the tough decision to step back from some extracurricular activities: a podcast, Open UI, my DnD group, and a handful of other obligations.

A lot of it comes down to something I mentioned in my post about PARA, the idea that projects have an end date. Almost everything I do ends up being an open-ended project. I need to reset a bit to hedge against that tendency.

In the interest of protecting the spoons I do have, I made a lot of efforts to groom my Twitter feed. I trimmed my follow list by ~20%. This round was an easy clean up of non-mutual follows, but the next round of reductions will be much harder. It might make more sense to unfollow everyone and rebuild my follow list from zero. That’s the nuclear option though, right now I’m comfortable with the current feed.

In the interest of reclaiming my time, I installed content blockers for Twitter Trending Topics on all my devices and browsers. This has been wonderful. I feel disconnected from the Outrage Machine. I’m not mad about daily British political drama or a myriad of other topics that have no bearing on my life. Some outrage still seeps into my feed, but it feels more warranted and natural without the bot-fed armies inside Twitter’s Trending tab.

Spent some spoons getting a handle on my (and my son’s) health. After years of off-and-on headaches and congestion, we visited an allergist. Describing my symptoms on how I seem to get headaches a couple days out from every rainstorm…

“Sounds like you have a granny’s knee.” ”?!?” ”Sort of like how grandma’s knee can predict the weather, your sinuses are sensitive to changes in barometric pressure.”

Yes. That’s what I have; a granny’s knee. Glad to have that confirmed by an IRL doctor. He put me on some metallic tasting medications that have helped and we’ll be getting a full panel of allergy tests to narrow in on what specific allergens might be bringing us down. I suspect it’s the cat…

The end of summer push

Most of my spoons went towards getting Luro ready for primetime. We had an aggressive “End of Summer” goal to finish a big re-architecture project and land some critical friction-reduction onboarding work. The last month is probably best illustrated by a burn up chart of the “End of Summer” tickets… 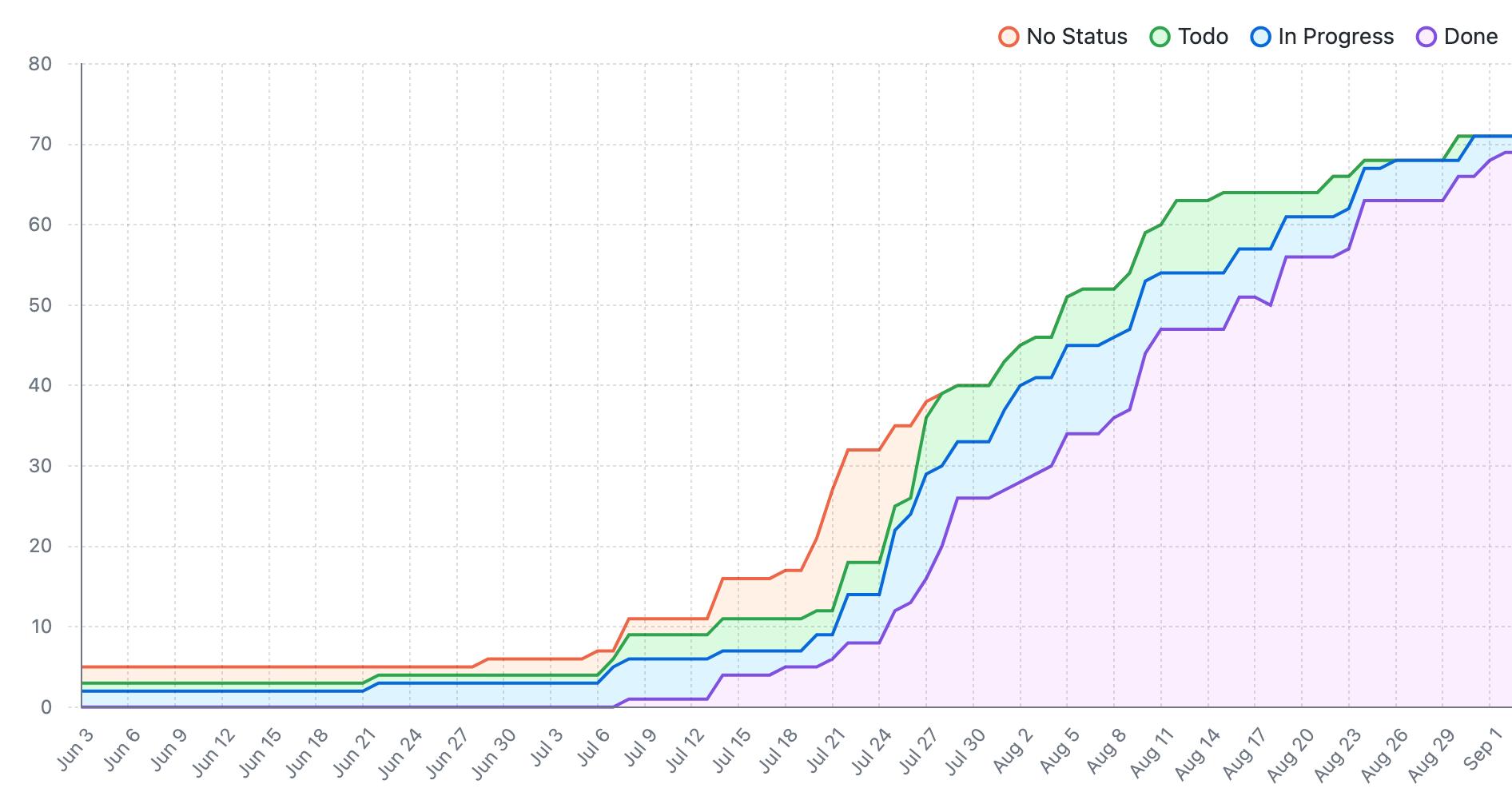 I’m happy to report we hit the mark and only broke one major feature in the process 🤪, but we got that fixed. 👏 Yay, team.

We put a lot into this deadline. I knew I was entering a season of hard work and making some tradeoffs with my time. My body and back are feeling the pains from overworking and hunching over my kitchen table (this is also where I blog, build gunpla, and play solitaire).

Starting a company is hard work, but thankfully we completed a lot of the heavy lifting. Now onto the next phase…

My son turned 9 years old this month. 5 years ago I was walking him into Kindergarten and in 5 more years he’ll be walking into high school for his freshman year. That is shocking to think about.

I saw the Austin FC beat the LA FC. That was epic.

I went to a tiki bar with some friends and had some pink drinks, a pu pu platter, and shared a drink out of a pineapple.

My son dropped his iPad. I watched him go through all five stages of grief. I tried to play it down, telling him he’ll have to be the kid with cracked screen for awhile and that’s okay.” But as I put on the case my thumb went right through the spongy screen. He’ll get a new one I’m sure, but this break in screentime is welcome (for us, his parents).

I read one interesting book, blogged some blogs, watched some anime, got into improv television, and built some enjoyable gunpla.