A couple Windows issues have been slowly gnawing at me over the last half year and, if I’m quite honest, have made me consider ending my ~5 year #davegoeswindows experiment and switching back to Mac (now that the Macbook Pros have good keyboards again). But I’m happy to report that I believe I’ve solved my problems and I don’t have to buy a new $4000 laptop!

The following is the tale of two vexing mysteries…

The Case of the Waking Computer

I built a gaming rig with that has white LED lights inside of it. Every night when I’m done with work or gaming, I put my computer to sleep and the lights inside the case turn off to notify me the computer is now sleeping for the night.

Yet every morning when I wake up the case lights were turned on! This is somewhat concerning to me from a power management perspective (it costs me money every time this behemoth turns on), but even more than that I was perplexed by “the why?” Why is my computer turning on? Hackers? A virus? Late night Windows Defender? What was causing the issue.

After some investigating, I learned I could use cmd.exe to get the name of the last trigger to wake my device…

This told me svchost.exe was responsible. While knowing “Service Host” is responsible is good information, and I’m glad it’s not virus.exe, it’s not particularly helpful. I needed to know which service was waking my computer from its slumber!

To get a list of services that might be running at night, I searched my computer for Task Scheduler. Task Scheduler, as its name implies, is a list of all chron jobs and when they run and how their last run went. It’s mostly utilities for software to call home and ask for updates. 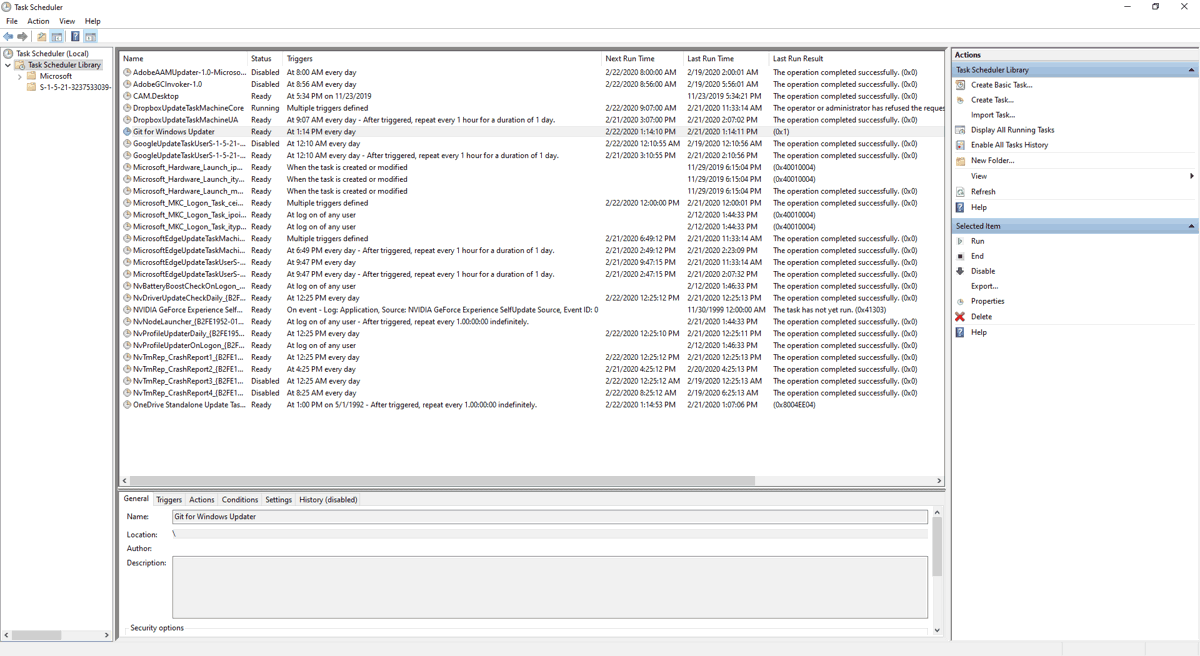 The Fix: I went through and tweaked the times of some apps to happen during work hours and totally disabled some other tasks (Sorry, Adobe Garbage Collection Invoker 1.0). So far, the computer is sleeping nicely.

The Case of the Shifting Volume Mixer

I’ve been plagued by volume issues on my computer since last summer. Even to the point that I was disappointed with a purchase of Microsoft Surface Headphones because they were too quiet. I searched headphone forums, no avail. I tried other headphones, similar problems. I filed bugs to the new Chromium Edge because the volume of any webpage (notably, YouTube) was near muted when I plugged in any pair of headphones. Nothing.

One day it dawned on me to Right Click > the 🔊 icon in the taskbar and select Open Volume mixer. Inside this ancient piece of tech I found evidence that some trickster has indeed tinkered with my app volumes! 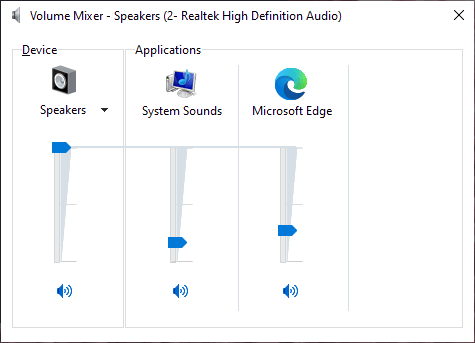 I manually moved them all up to 100%. But the next day the problem returned! Curious indeed!

After more investigation, I learned that Windows apps can get access to Windows’ CoreAudio and manipulate the volume. So… an app is to blame? But who?!

The likely target is a communication app ducking the volume when I’m on calls. But that only narrowed the field to WebEx, Slack, Zoom, Discord, or Teams. I suspect it was Teams, they likely have the best understanding of Windows’ CoreAudio, but because I couldn’t find a “Stop Changing my Volume” setting I had more or less given up.

Defeated, for the last 8 months I’ve resigned myself to periodically opening Volume Mixer a couple times a day to make sure my levels are right. Fighting my operating system was driving me up a wall, but I think I found the fix last week… 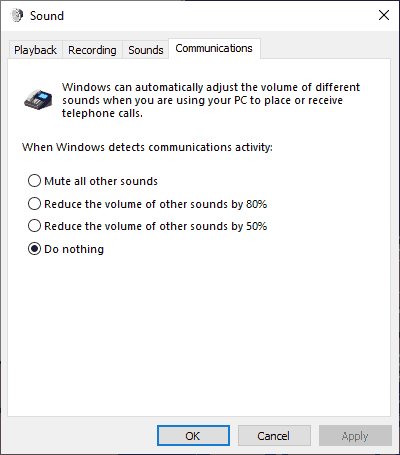 The Fix: I think I found a way to stop this pesky behavior hidden under Settings > System > Sound > Sound Control Panel > Communications . Under that menu is a radio select box that says Do nothing when Windows detects communications activity. Now my volumes won’t be molested by random applications and boy-howdy does it feel great.

Whether it’s audio problems or a malfunctioning Touch Bar, issues where the fix isn’t clear are some of the most frustrating. In my situation, it’s great I could configure my way out the problem, but smarter defaults would be nice. Just because my PC is plugged into a wall doesn’t mean I want it to wake up every night and burn electricity. Just because I use communication apps, doesn’t mean I want 50%~80% sound reduction by default. And certainly don’t want that answer hidden in a quintenary settings panel.

I think Windows still has some challenges here. Digging around in these apps and panels makes Windows feel ancient (these are nearly 25 year old screens). A new coat of paint would do wonders, but the deeper issue is that managing settings is hard UX. Even iOS’ Settings app suffers from complexity.

Yielding customizations to the User is always an interesting design challenge to me. Customization options give the user autonomy and control, that’s good. But too much customization compounded over many apps, now settings are completely buried and non-intuitive. Finding the Goldilocks level of “just enough” customization is difficult and I’m curious to find examples that do it well.