It’s official: I’m going Windows! After my original blog post, I started a few conversations with Rey Bango from Microsoft who surfed all the proper channels and secured for me a Surface Pro 3. Over the past week or so I’ve been migrating over to the new machine.

In the interest of complete transparency the deal is pretty “no strings attached”. No money changed hands, no time limits, but in exchange for this Surface I’m obligated to blog and talk about my experience on Windows, which is exactly what I planned on doing. 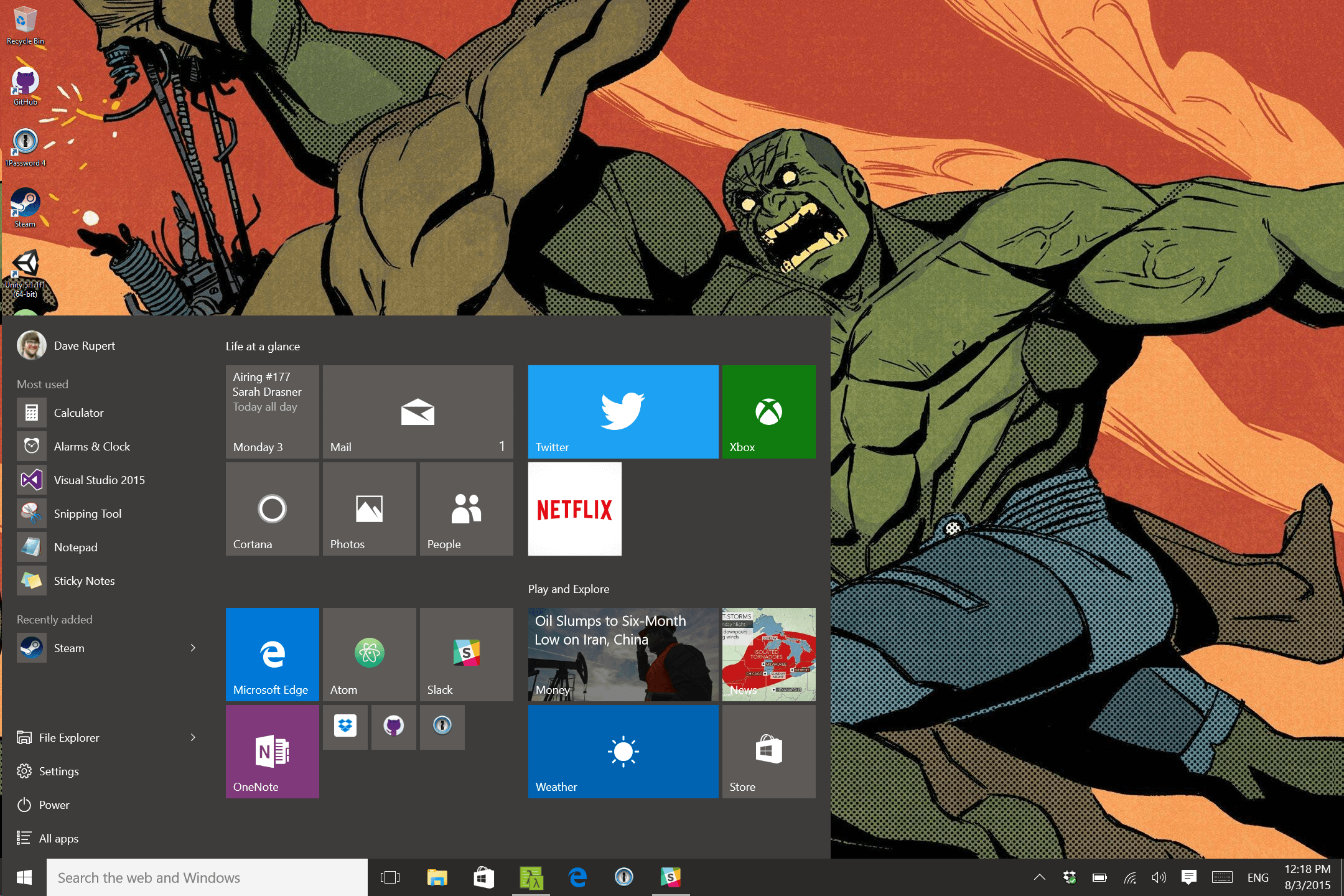 The Surface is a great piece of hardware; perfect size, weight, and touch responsiveness. The kickstand is amazing. The Type Cover keyboard can be a little tight (I recently just switched to a big ergonomic keyboard), but more akin to a laptop keyboard than a tablet keyboard.

Logging into Windows 10 I was a little worried everything I liked about Windows 8 was destroyed. For the most part it was (!!!) and that’s a good thing. Turns out people who use Windows tended to like “windows” in their operating system and 20 years of Start Menu’ing can’t be so wrong.

I feel like the “window” metaphor is being further extended in Windows 10. The PC, while still a machine that stores all your games and photos, is quickly becoming a pane or “surface” for interacting with The Cloud, a window to the Web. And that is something I adore.

By downloading binaries it was pretty easy to install Git, Node/NPM, Python/PIP, Ruby/DevKit. The only mental shift is they install in the C:\ directory instead of stuffed in some usr/var/bin folder. Tools like Jekyll are a pretty significant piece of my workflow and by following a tutorial I installed Jekyll with no problems. Solving a major hurdle so easily feels good.

Based on some #hottips from Wes Bos, I installed cmder as my command prompt. It’s Windows PowerShell with a few Unix niceties.

I still need a few things like Ruby on Rails/Postgres, but I’ve been surprised that the dev environment process has been relatively pain free. In fact, the only pain point I’ve experienced is compiling libsass from source because the instructions and settings are for an older version of Visual Studio.

I’ve been using Edge as my primary browser and all I can say is: Edge is fast. Like really fast. Like when you ask me what I think/feel/remember about Edge, I say it’s fast. I don’t know if Trident/Chakra has always been getting faster or if I’m subconsciously comparing it to IE8 on Windows XP, but it’s fast. Maybe they’re doing some weird turbo-caching like Opera does. Either way, it’s fast.

I’ve noticed a few bugs on sites I’ve built. They’re typically from corners I knowingly cut. Even when I suspect a bona fide bug with Edge, instead of being filled with browser rage, an amazing calm washes over me. That calm is due solely to the fact that I know the Microsoft Edge team is working hard to add features and make things better.

Microsoft is now actively listening, contributing, and sharing their roadmap. In Microsoft Edge you really get the sense there’s an all new Microsoft afoot.

So far so good. I’m excited to continue moving forward with the experiment and look forward to blogging about my experience. If you have questions, comments, or concerns feel free to leave a comment!