Recap of my February and the Great Texas Freeze of 2021

February, whew. My February was dominated by two significant and polar opposite emotional events: my new backyard office shed is finally finished and the Great Texas Freeze of 2021. To be honest, the massive pendulum swing between those two vibes has nearly wiped out all other vibes.

On a chilly Thursday, February the 11th, I was handed the keys to my new backyard office space. With a lock on the door and an air conditioner installed, I was now free to move computers and desks into what I hope will be my workspace for the next twenty years. It’s really exciting to have a space that is not adjacent to the main pathway in our house, not next to a dog barking at delivery drivers, and a place that is not within earshot of the virtual school. It’s a luxury for sure, and I’m glad to have it.

This was the culmination of a two year saga. I built up a lot of knowledge and opinions about building your own backyard space and I’ll write more about it I swear. I’d love to show you the inside too, but it’s a dumpster fire of graphic novels and old cables on the floor. I need to do a round of purging, then buying furniture and rugs which is harder and slower in COVID times.

A lot of my energy and anxieties this month went into the shed and mentally designing the space, until… 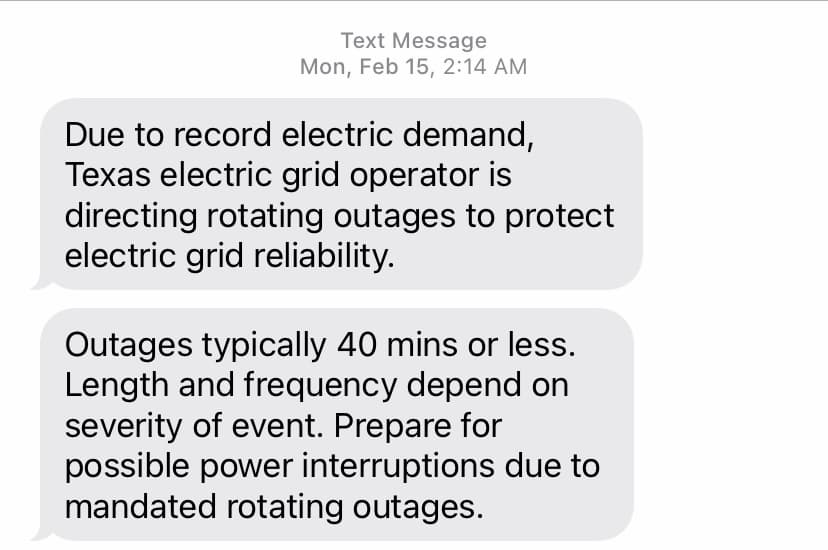 At 2:14am on Monday, February 15th, rumors were confirmed when we got a text from Austin Energy notifying us that rolling outages would begin in our area. We were told “Outages typically 40 mins or less.” Our house was warm, kids bundled up, we should survive the night. At around 3:15am, the power shut off.

We woke up to a temperature of 7°F (-21ºC) and it was about 56ºF (12ºC) and dropping in the house. After 12 hours, it became very clear this was a catastrophe and the power wasn’t coming on soon. The lie of a “rolling” blackout set in.

We stayed warm by boiling a pot of water on our gas stove. My wife crawled into our camper and got out extra blankets and our Little Buddy propane heater. The kids wanted to play in the snow, but we didn’t have a great way to get warm again so we stayed indoors. Thankfully, a friend who goes skiing brought by some hand-me-down snow clothes and we could make snow angels in the lousy snow.

Over the next few days we got by playing solitaire in jackets at the kitchen table, wearing the batteries down on all our devices, and reading the illustrated version of Harry Potter. We brought coffee to our elderly neighbor while she waited for rescue. We shoveled another elderly neighbor’s sloped driveway with primitive tools because they used their car to stay warm and charge phones. We helped another neighbor mop up their house with spare towels when his hot water heater exploded. Thankfully we avoided any catastrophes. On Monday we noticed a toilet had stopped filling, so I spent my whole afternoon with a Yeti thermos filled with boiling water trying to thaw exterior spigots to get flow restored. Feeling lucky.

Each day we had a “Go/No Go” moment where we considered leaving our dog, sick cat, and elderly neighbors to brave the roads to get to friends’ houses for warmth. Each day, that friend would soon text us to say their power had also gone out. We resolved to wait out this shittiest of all camping experiences.

It was ERCOT, the state energy board, who mandated that cities shut off all non-essential switches. Five million Texans without power. 42% of Austin, TX without power. Infamously, there were wind turbines freezing up out West, but you probably didn’t hear about the larger problem of natural gas wells freezing resulting in a near-complete crash of our entire energy system. Most states would simply borrow more energy from another electrical grid… but not Texas. Texas made the decision to avoid federal regulation by having its own isolated electric grid. This was a crisis caused by libertarian “pro-business” policies and the inability of the invisible hand to spur energy companies to lose profits on winterizing equipment. In fact, gas companies and millionaires laughed all the way to the bank saying, “We hit the jackpot.”

Not everyone hit the jackpot. Some lost more. The electrician who ran ethernet to my shed said they burnt $500 in IKEA furniture and started peeling boards off their fence to stay warm. Other Texans were even less fortunate, losing family and children in this disaster caused by corporate greed. A gut-punch to the entire state after a failed coronavirus response that has left 44,000 Texans dead. Living through the failure of capitalism to respond to climate change adjusts your perspective.

In total, we spent 75 hours without power. Austin Energy missed their rolling blackout estimate by 4,280 minutes. Thankfully we made it out relatively unscathed. The biggest lingering impact is that the fire system at my daughter’s preschool failed, flooding the school and neighboring church, she won’t be going back for some time.

This experience leaves me feeling thankful. Thanks to all friends and neighbors in co-misery who helped us get through this. Thanks to everyone who reached out offering help. Thanks to northern family members who gave us winter weather tips. Thanks to our camping group, those skills no doubt helped us stay warm. Thanks to my wife for being a rock. Thanks to my kids for their resolve. Thank you HEB for being the government. Thank you Beto and AOC for stepping in as Texas leadership and raising donations.

For the sake of the “only vibes” experiment, let me document some other vibes from this month.

Like I said, highs and lows dominated my month and although still I’m under the lingering psychic damage effects I’m hopeful next month is better. My mood appears tied to vaccination counts.