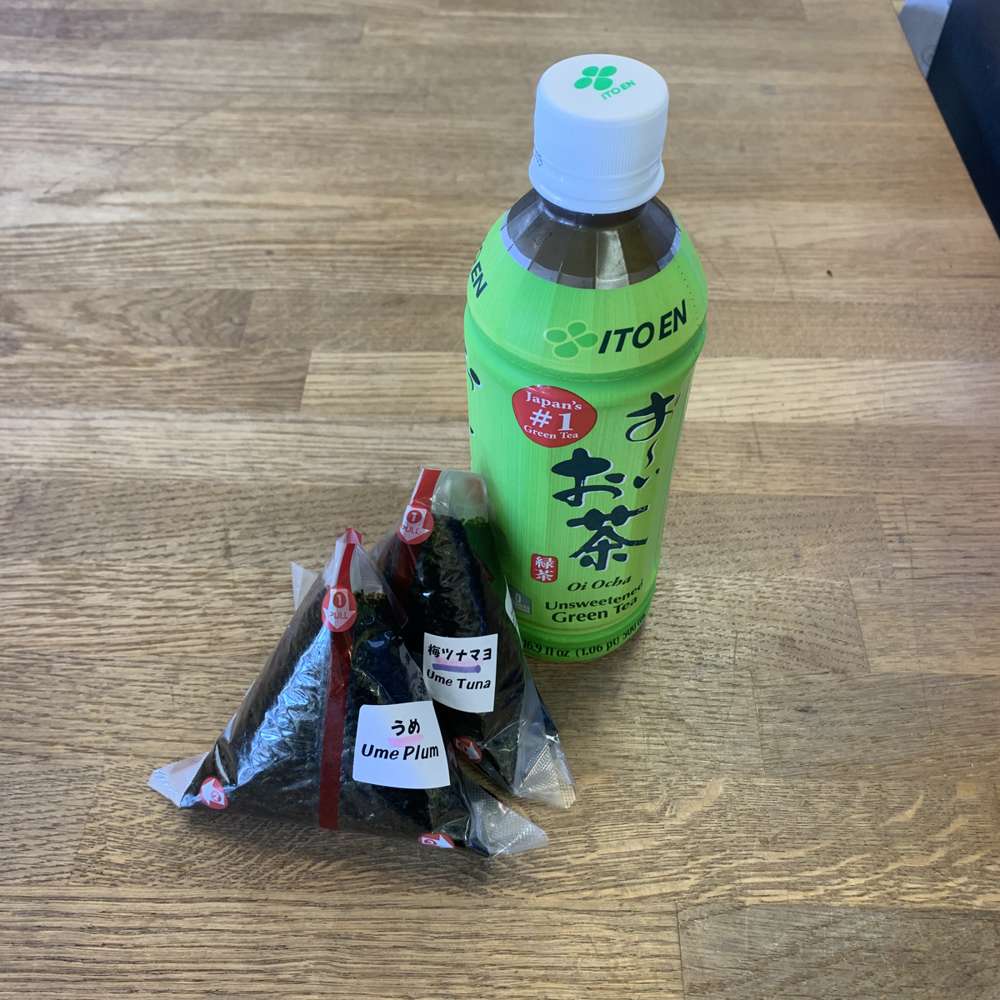 Around the corner from my summer office is Asahi, Austin’s oldest Japanese grocery store. I remember visiting there in college over 20 years ago. I also went to college with the daughter of the owners, but that was pre-Facebook so unfortunately I’ve lost track of my cohort in the Japanese program. Asahi is a quaint two room bodega in a strip mall that sells various wares and foodstuffs from Japan. My wife and I bought our rice cooker from there over 10 years ago, because I was tired of burning rice in a pan and knew there was a better way.

My co-worker and podcast co-host Danh, who is also a local Asian food mentor, put it together that I worked next to Asahi. He asked me if I had been there, regretfully I hadn’t yet, then he asked, “Did you know they sell onigiri?”

Onigiri (Japanese rice balls) pack a lot of nostalgia for me. When I lived in Japan from 2003-2006, I ate onigiri for breakfast nearly every day. Each morning I would stop by the Famima and get two rice balls and a milk coffee on my way to work. Simple, but delicious. It was surprising that when I left Japan, saying goodbye to the convenience store employees was one of the more emotional goodbyes.

Since this recent revelation, I’ve made an effort to resume my ritual from over a decade ago and wander over to Asahi nearly everyday to pick up a tuna mayo onigiri, an umeboshi onigiri (pickled plum), and an O~i ocha green tea. I’m the most food happy I’ve been in a long, long time. The umeboshi tastes wonderful and refreshes the spirit in this 100℉ heat.

View What’s Changed and Where’s it Going? on Notist.

Last month I gave a new talk at An Event Apart DC called “What’s Changed and Where It’s Going?”. It ended up being a reflective look back at Responsive Design and how the web has modernized quite a bit in the last nine years. I share some case studies of work I’m doing and how we’re managing and improving the sites we’re working on. It ends up being a lot about performance with a little bit of where I see websites going in the next five or so years. A lot of these ideas have been hashed out on Shop Talk over the last year or so. If you missed the talk and the slides don’t provide enough context, I’m working a transcribed version of this talk over on Notist.

Pulling back the curtain a bit, putting together this talk was tough on me. Apart from a complete redesign of the slides, I think the talk is where I want it. But I was overloaded at work and had to summon 40-60 hours out of nowhere to pull it all together. That was hard on me (back problems from hunching over a computer late at night and I definitely put on weight by stress snacking). I’m grateful for the opportunities, really, and do enjoy giving talks, but this time around has me re-evaluating my relationship with public speaking. Being unable to achieve any balance this time around was stress on top of stress. I’ll probably stack rank my goals and life objectives soon and see where it all stands.

As summer winds down and the kids head back to school, there’s been some big changes in my worklife. Client services is a weird business and changes in contracts have resulted in my day-to-day schedule changing completely. Meetings and standups I’ve been attending for months have vanished and been replaced by other meetings and standups in different time zones. I’m only two weeks into the shift and it’s been a welcome upheaval. I think I was unhappy in my previous situation and now I’m able to better control and organize my schedule, I now feel some balance and definitely feel more impactful and productive than months prior.

And in related summer news, I’ve made the decision to stop the lease on my summer office. It was a really great opportunity to pilot working out of the house. My workmates at Juice were nothing but wonderful. After talking with my family, however, we concluded that we enjoy our lifestyle with me working from the house. Escaping the commute gives us another hour a day to be together. And as I tend to work a smidge late, that lateness isn’t amplifed by a commute home, I can work a bit late and stroll in and not be late for dinner.

Frank Chimero on causing ‘good trouble’ and re-imagining the status quo to combat achievement culture (creativeboom.com)
I love Frank’s mind and I’m inspired by his rejection of the 40 hour work week.

Why Did I Have Difficulty Learning React? (snook.ca)
I’ve learned a lot through Jonathan Snook over my career and this piece on his struggles to feel comfortable in the new paradigms of JS frameworks is very relatable.

frontend design, react, and a bridge over the great divide (bradfrost.com)
Spiritually related to Snook’s article, Brad finds utility in JS frameworks as a responsive deliverable in order to bridge the gap between the two sides of the Great Divide.

Tips for Portable Patterns (cloudfour.com)
Tyler Sticka talks about delivering patterns in a situation where your target framework is either variable (React, Angular, Vue, WordPress, etc) or unknown. If I were starting a design system today, I’d follow this approach.

Amphora. (ethanmarcotte.com)
It’s frustrating that AMP continues. Ethan is much nicer about it than me and patiently shows AMP’s carousel taking a giant shit on VoiceOver.

Truths about digital accessibility (ericbailey.design)
Eric Bailey lays it all out. It’s an insightful read and covers a lot of the misconceptions people have about Accessibility.

Fast Software, the Best Software (craigmod.com)
Craig Mod talking about the Time-To-Interactive and its effects on feeling productive. I totally agree with his assessment and what I find interesting is that if someone criticizes something as slow… and you start to feel that it is slow… you can never unthink that unless it becomes noticeably faster. I’m currently experiencing this with Notion, a software I love.

The Multiplayer Mode Was Made In A Month? 12 Killer Facts About The N64 Classic ‘GoldenEye 007’ (uproxx.com)
“GoldenEye 007 was developed by only nine people, eight of which had never worked on a game before.” 🤯 The multiplayer feature of Goldeneye which defined the game and is the foundation for all FPS games in existence was just thrown in during the last month by a single developer. Wow. I would honestly read a book about this.

Blizzard explains new Overwatch hero’s design, mental health, and baby-soft feet (polygon.com)
A great look into the stigmas and tropes of mental health in Overwatch’s new character Sigma, a man so driven in his pursuit of science, he split his mind.

Watching Sarah effortlessly create a portfolio site using Vue in a 40 minute talk is wonderful on two fronts: A) it shows off Sarah’s genius both in JavaScript and SVG and B) it shows off nearly all the parts I like about Vue and Nuxt. It’s a great talk and I recommend watching it.

Here’s one that’s not mine…

“Backlogs make you feel guilty.” – Jason Fried (transistor.fm)
After all these years I still admire 37 Signals/Basecamp’s approach to software design and development. It seems so relaxed and healthy. This nobacklogs stuff is interesting to me, but I resonated with the “Hack the unknowns first” approach (which I’d do via prototypes, natch).

And the rest are mine. Lots of great Shoptalks (here are just a couple) and I still like doing Aside Quest.

367: Accessibility with Nicolas Steenhout and Christopher Schmitt (shoptalkshow.com)
In this episode we hit on the idea of “Accessibility Champions” in your organization and I love it and want to formalize it and is a very powerful sentiment for me.

369: Full Jamstack React Developer (shoptalkshow.com)
Chris and I sit down to talk about JAMstack and our new lives as Full Stack Developers. I love these episodes where Chris and I get to talk and explore what’s weighing on our minds.

370 Resilient Management with Lara Hogan - Shop Talk Show (shoptalkshow.com)
Talking to Lara Hogan about her new book was a highlight of recent shoptalks for me. Lara is such a great thinker and no doubt top of her craft in this arena.

End of Summersode – Aside Quest (asidequest.simplecast.com)
Still at it on Aside Quest, my video games podcast for people too busy to play video games. It’s really fun. Please listen so I can justify doing it.