This past year was a mix of successes and heartache. My family bought and sold a house, moved to a new area of Austin, we shed tears in doctors’ offices, our oldest learned to swim, our youngest jumped in a pool while no one was watching but thankfully my wife was able to jump in and rescue her, I underwent body modification as a form of birth control, my son started Kindergarten, I suffered an RSI spell, and my wife tore her ACL. We survived but managed to hit the $10,000 deductible on our health insurance and that is probably the best metaphor for 2018’s emotional toll.

Looking back at last year’s end of year post, my path changed quite a bit. I ended up speaking at two An Event Apart events and launched another Accessibility-focused open source project. While I worked a few JavaScript projects in various frameworks last year, most of my year was spent suffering in a legacy Java application and in the last month or so I think I’ve settled on Vue being the ultimate frontend framework. That’s facetious, but I really enjoy Vue, it ticks a lot of boxes for me, and find myself wanting to use it everywhere.

I failed to ship a game this year (but made progress on at least one prototype that I’m now rewriting in Vue). But there were a few tradeoffs on how I spent my available free time.

I consumed a fuckton of books

I consumed more books than I have in a long, long time and it feels really good. I attribute it to two things: embracing the desire to read and keeping track of what I read. I even joined my local public library where I found a cache of free audiobooks, graphic novels, and eBooks. I’ve worked it out to where my brain can juggle about three books simultaneously: an audiobook on my daily walks, a graphic novel on my couch, and an eBook on my Kindle. 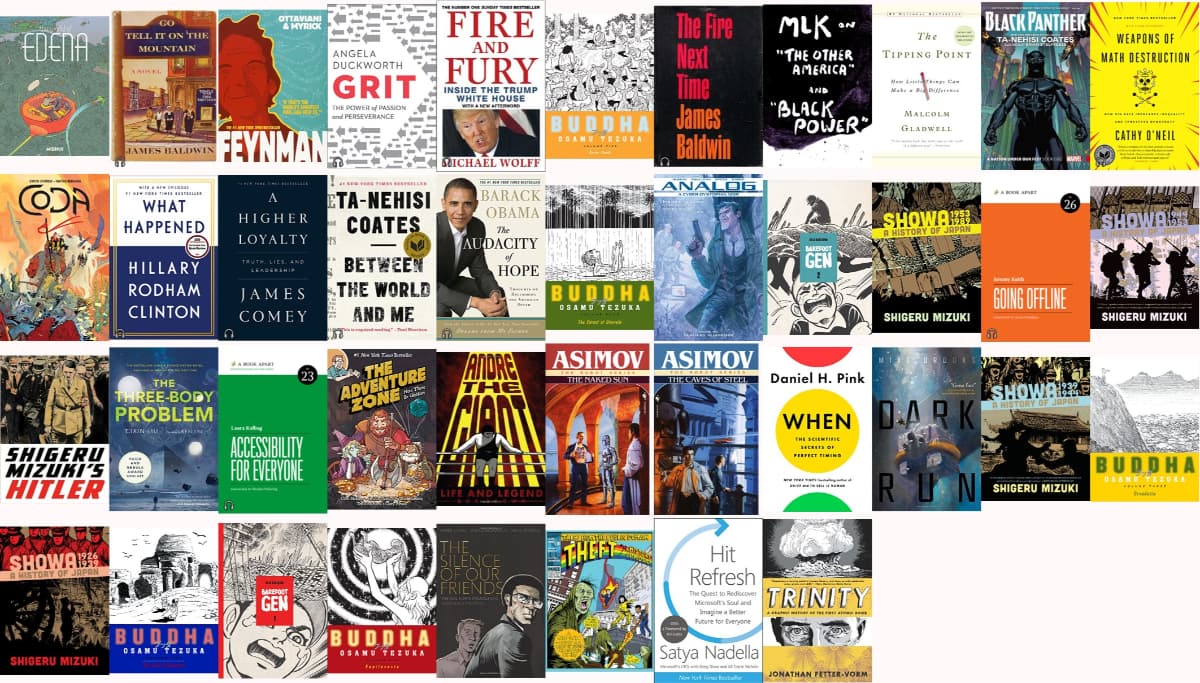 I explored a handful of avenues with books this year. The first was Sci-Fi. I really enjoyed Asimov and found more modern novels to be wanting. The second was non-fiction graphic novels with a locus around the Second World War. The third trail I explored was the Civil Rights movement; from older works to more modern works, it that helped me understand the experience and struggles of Black Americans. The fourth major trail was political audiobooks. I want to be a more active and informed citizen and I’ve found these various biographical accounts helpful to process what’s going on in American politics.

Books have been a much welcome departure from Social Media. Collections of coherent and edited thoughts are an antidote to Twitter’s endless cesspool of unfiltered hot takes.

Shop Talk wrapped our 7th year of shows. As I took some time to reflect on that fact, I came to realize how happy it makes me that Chris and I get to sit down and have a conversation each week. Sometimes it’s just us, but sometimes we invite other people who are experts in their domain and get to see how they think about the Web. Over the years we’ve spoken with hundreds of talented people and it’s exposed me to new ideas and allowed me to hone my own.

I’m thankful for all the perspectives that have poured into Shop Talk, and there’s room for more. For 2019, we have a binder full of show ideas already and we’ll be partnering with Dan Mall and a couple new friends on redesigning the Shop Talk site.

Aside Quest garnered ~20 shows before an unintended hiatus due to aforementioned family health problems. It’s hard to record a podcast at night when you pass out from exhaustion at 8:30pm each night.

Despite the scheduling taking a hit, I feel like Danh and I accomplished our original intent. I managed to play ~25+ different games last year. Not too shabby and more games than I think I would have played otherwise.

I’m looking forward to continuing the show next year, playing more games, and experiencing more stories. And Aside Quest will be bringing in our friend Zach Meyer from Between Players who will no doubt up our level of discourse.

I blogged 39+ posts in 2018 for one of my best years yet. That’s almost a post per week. Family health, RSI, and a weird new keyboard stalled my commitment some and, as I wrote about before, I caught myself going down a bit of a cynical path. I’m glad to have caught that and realigned myself and hopefully will pick up the pace again soon. I even got a new laptop to help and might employ an editor to see how that feels.

The best thing related to Blogging in 2018 was reading others’ blogs! Blogging is in a bit of a micro-renaissance and I couldn’t be more happy about it. To those who blogged in 2018, thank you. To those who plan to blog more in 2019, thank you and I’m eager to read your thoughts.

I remember discussing with my wife and even blogging at the end of August that we hoped the worst of the year was over and we were at a turning point. Little did we know 2018 had at least one more knee surgery sized twist in store.

I hope 2019 isn’t a repeat of 2018. I wonder if it’s a yin-yang situation where the good and the bad are intertwined. While it has been a rough year, I’m thankful for my family, our friends, our neighbors (new and old), and the people I get to work with on a daily basis. I’m very privileged in that regard to have great people online and in-person around me.

As for tangible and measurable goals, I’m planning on reattempting Couch-to-5K early next year with the ultimate goal of doing a Sprint Triathlon by the time I turn 40. In 2019 I’d like to consume at least 20 books and play 19 video games. I’d like to hit plat in Overwatch. After that, I’d like to stream more, ship more projects, and make more games. I’m also breaking ground on a new backyard office work shed, so stay tuned!

Thanks for reading, friend.