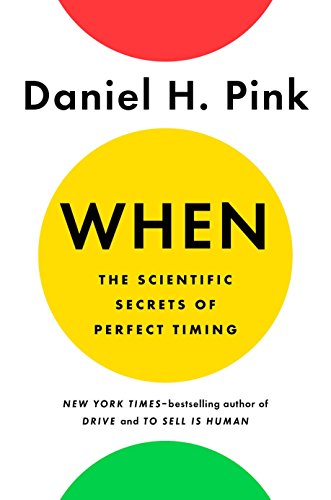 I recently finished When: The Scientific Secrets of Perfect Timing by Daniel Pink. I’m a sucker for indulgent pop-sci books and this one did not disappoint. The book itself is a roundup of learnings and takeaways from academic papers all relating to the theme of timing, broadly attempting to answer the question of “When?”

I graduated in 2002 just after the dot-com crash. I worked for a year then I hit the pause button on life and taught English in Japan for three years. After Japan, I re-entered the American workforce making websites for a real-estate company in Phoenix in 2006/2007… this did not end well. Had I graduated later would I be better off? I’ve heard young graduates entering tech these days expect upper-five- or even six-figure jobs and I choke a bit thinking about the $18,500 I made when I graduated.

I’m less worried about the money (but if one recession hinders your lifetime earnings, what about two?!?), but I do wonder how different my life might be. I imagine my technology choices, opinions, and development sensibilities might be entirely different. My cohort of like-minded, similarly-dressed Internet colleagues would have different heroes, different groupthink, different aesthetics, different earning caps. I would stand on the shoulders of even more giants. I would be different.

“Privilege” is a word that’s thrown around a lot these days. It intrigues me that privilege has a temporal aspect to it. Even the point inside a ~5 or ~10 year window in which you were randomly generated can have dramatic effects on your life. And that privilege compounds like interest in a bank account.

All said and done, I’d recommend this book if you’re curious about how timing coincides with circumstance. Probably the most valuable part is learning about your own “chronotype” which determines when you’re likely to be the most productive and in a better mood during your day. Wouldn’t it be great to organize your day around your biological productivity cycle.