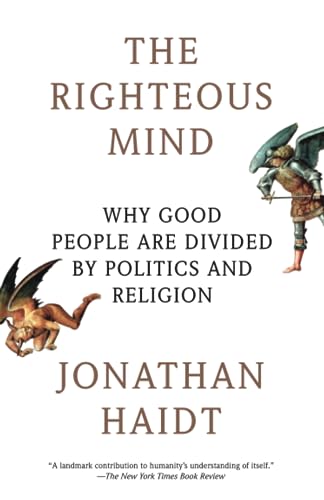 I’ve been an admirer of Jonathan Haidt for nearly a decade and when I read Mike Davidson’s Very Short Book Review on Haidt’s book The Righteous Mind, it was an instant purchase.

Amidst all the political outrage, turmoil, and hyperbole of 2017 I found myself wanting to truly understand the difference between Liberals and Conservatives and why they get together like oil and water. I needed a framework for understanding the differences so that I could explore and feel confident in my own political viewpoints.

I found that framework in Haidt’s book. In fact, I would go so far as to say I almost don’t want to discuss politics with anyone unless they have read this book. That’s audacious, but I feel like there’s an emotional intelligence to this book that I don’t see in common political discourse. Haidt seeks to understand our differences and through our differences find our similarities.

Haidt argues that morality and the human desire to be right in every situation (read: “righteous”) is probably the result of human evolution. Could it be that we were born with our politics?

Haidt, through his research in the field of moral psychology, has developed a moral matrix consisting of 6 rules. It’s from these 6 pillars that we build our own understandings of morality. Here’s a breakdown from Wikipedia:

Once you understand these foundations you can start to see the tie that binds the whole human race together. You see both the Liberal and Conservative responses. The same moral foundation manifesting differently. Not inherently wrong, just different.

For instance, Care vs Harm is a strong virtue for Liberals. Liberals care for the environment, care for undocumented immigrants, care for income-challenged youth who need a free breakfast at school so they can do well. For Conservatives care and protecting others from harm manifests in security and self-defense… guns.

Fairness vs Cheating is also important to Liberals and shows itself in trying to give everyone in society the same opportunities. Conversely, in Conservatives this manifests as a distaste towards social welfare, believing that no one should get special advantages.

I could cover all of them but you should really read the book. But once you understand the Conservative and Liberal responses to the moral foundations, you can’t unsee them. You see people appealing (wittingly or not) to these moral foundations on Twitter. A lot of Twitter’s outrage machine is “virtue signaling” to the Loyalty foundation testing whether people belong to the in-group. Darker still, you see politicians and news organizations manipulating these moral foundations for political gain.

Politicians, news orgs, and Russian bot nets know what trigger your moral matrix. They know what can nudge you away from an otherwise moderate or lukewarm position. If you do not understand your moral foundation, you are susceptible to being manipulated.

A simple example is the NFL protests and the Black Lives Matter movement. For the Left, it was about Fairness for Black Americans and Liberty from over-policing. But the Right was mobilized by positioning NFL protests and Black Lives Matter against Loyalty to our police and troops. This plea towards Loyalty has been the number one counter-tactic towards protests since Civil Rights Movement and the Vietnam War. It’s a dark pattern for sure, but the flag (as well as American football itself) can be used to exploit our natural feelings of in-group patriotism.

I could go on and on. But you see these deep down almost-innate responses to the moral foundations show up in the news every single day. In many ways I feel like I can start to see the world for what it really is; broken by misunderstanding.

I can’t recommend this book enough if you are a political moderate or simply depressed about the current political climate.