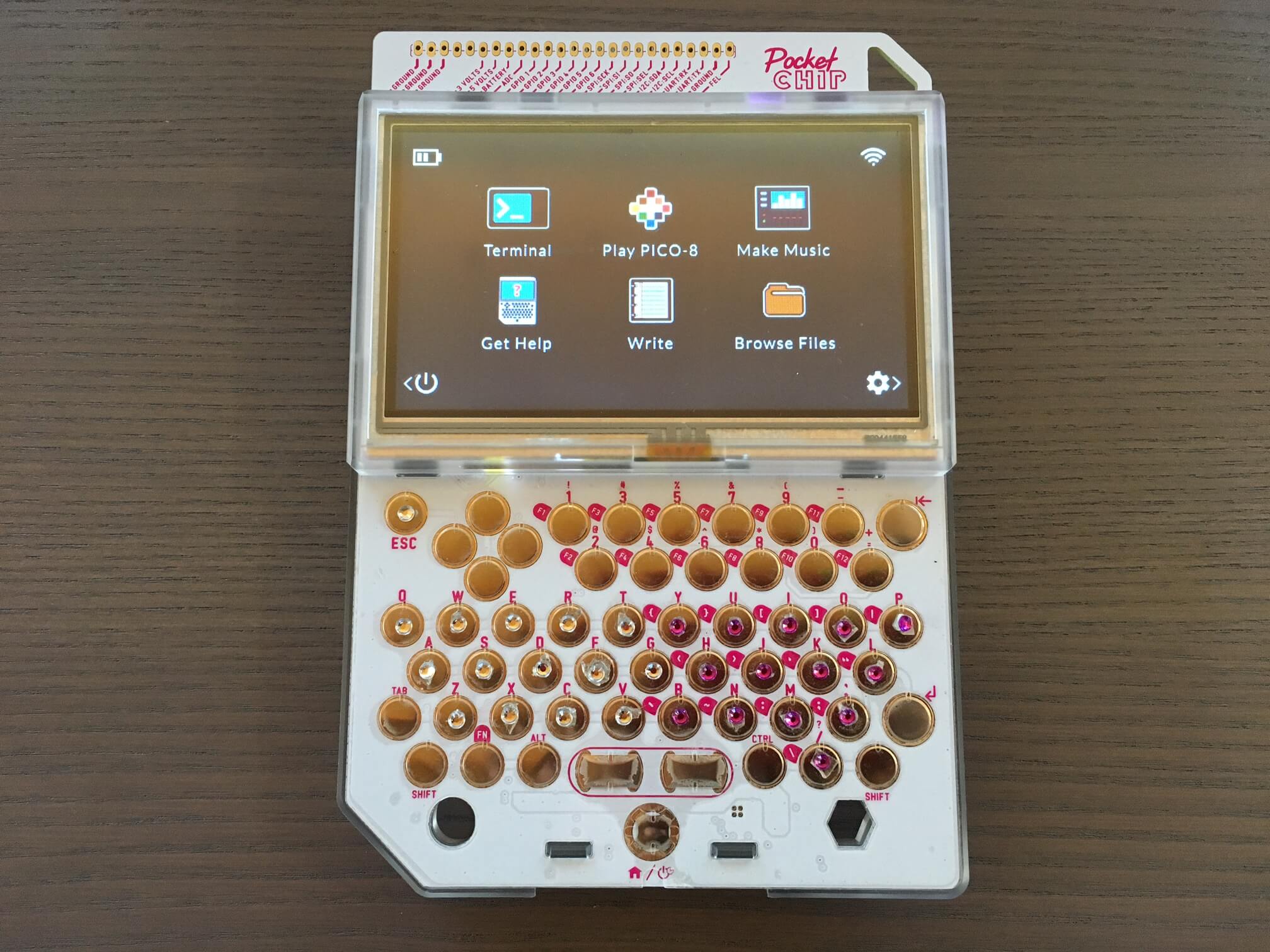 Last year my now-obsolete iPad mini graduated to become the kids’ entertainment device. Since then I’ve been craving a device I can use to browse the web, play games, or even jot an occasional blog post. A few weeks ago I got my PocketCHIP and I have some good news!

The PocketCHIP is a $69 touchscreen tablet device with a built-in keyboard, USB, and an analog headphone jack. Inside this device is a $9 computer (similar to a Raspberry Pi) loaded with a custom Linux distribution that provides a nice, light User Interface and comes loaded with a few apps: a terminal, a text editor, a music editor, a file browser, a web browser, and a game console.

Is the CPU fast? No. Is the touchscreen great? Nah. Does the battery last long? Not really. But do I really like it? Yup.

PocketCHIP ships with a simple webkit-based browser called Surf. It’s a good browser but skates under most User-Agent browser sniffing so you get served lots of unusable, horizontal scrolling websites.

If you crave something with more dependable browser detection (you do), I recommend installing the Firefox ESR (formerly Iceweasel). 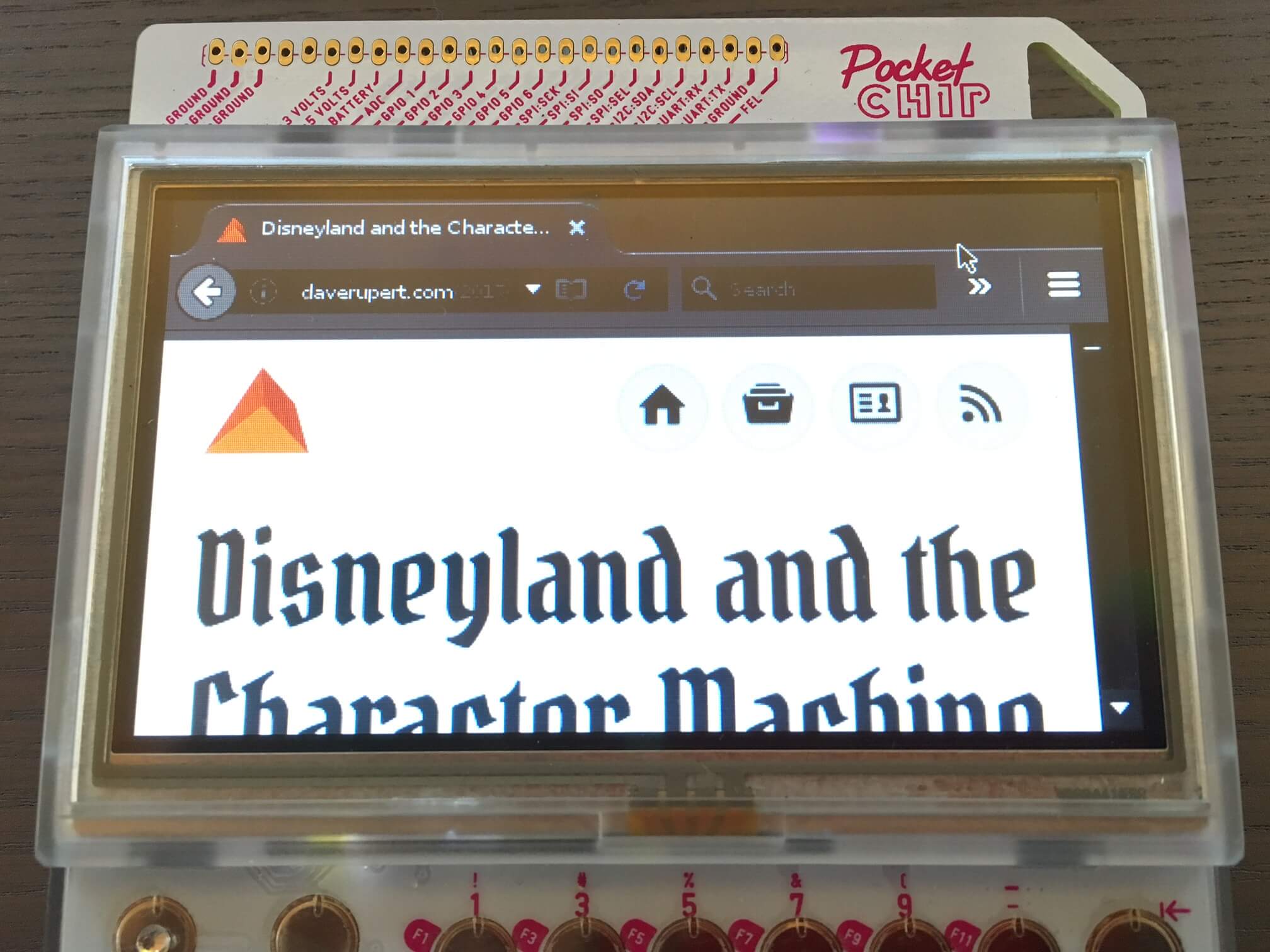 Here are some interesting discoveries I found browsing the web on this lil’ device:

Surfing the Web on the PocketCHIP isn’t flawless, but it’s not out of bounds for this little device. Once you learn the keyboard shortcuts it gets easier. I frequently find myself using the web to chase little brain tangents.

With a single command you can install an NES emulator called fceux. With a thumbdrive full of ROMs, you got yourself a nice little Gameboy.

Navigating fceux can be a little quirky. You’ll need to be very comfortable with ALT + Key menu navigation shortcuts. The first thing I did was open the Options › Gamepad config menu to remap the A and B buttons to the O and P keys. To play games fullscreen, go to Options › Fullscreen then use ALT+Return to exit. 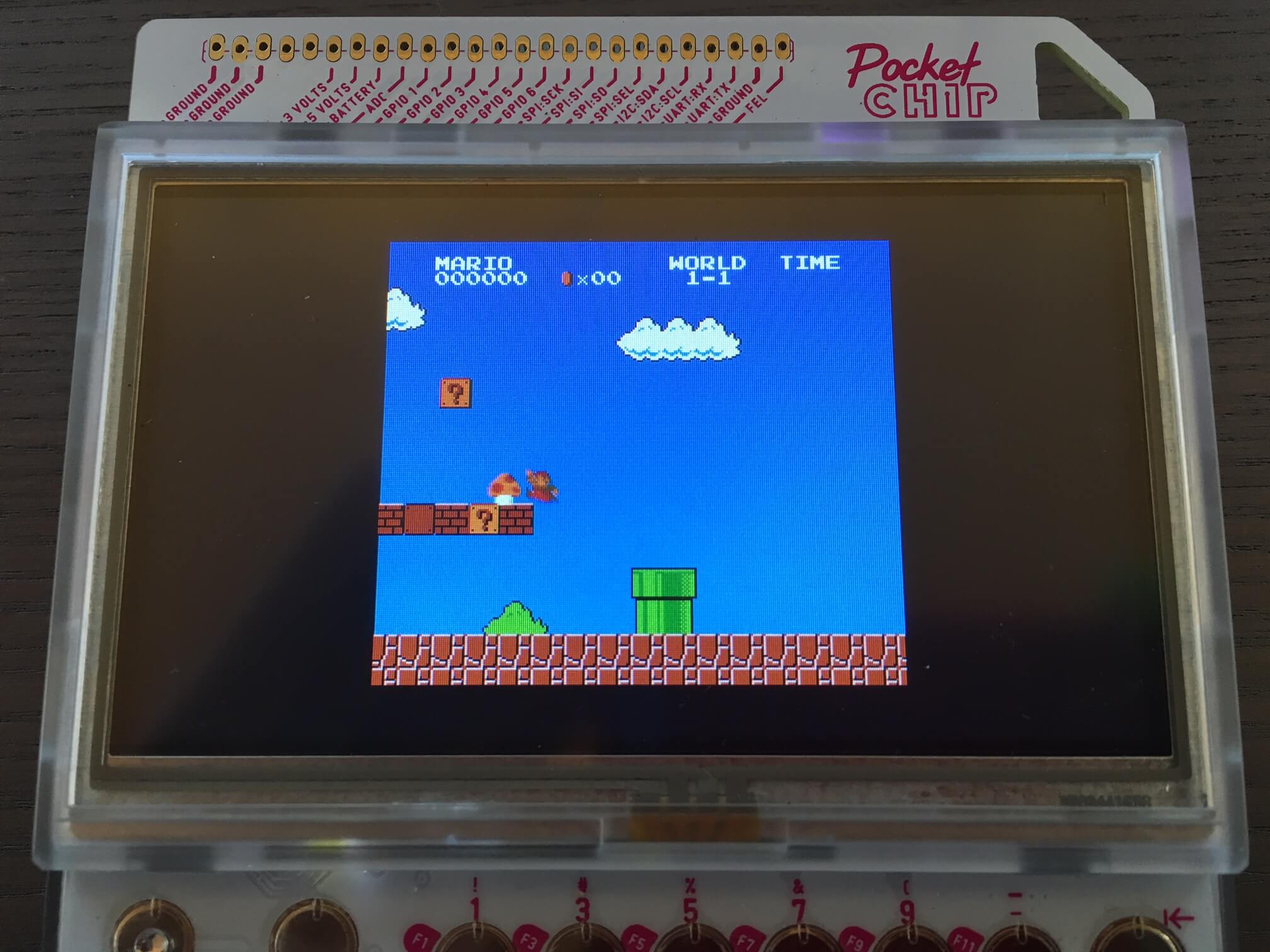 The PocketCHIP also ships with the Pico-8 fantasy console. Pico-8 games are playable retro-style games that are comepletely editable. The coolest part is that the “cartridges” are embedded in PNG metadata. So cool.

I’ve found the iPad isn’t ideal for blogging. That’s due to a mix of the never-quite-right portrait keyboard and over-aggressive autocorrect.

Wouldn’t it be nice to have a little device (that’s not my laptop) where I can blog some thoughts from the couch? That’s the void I hope PocketCHIP can fill and things are off to a good start.

Since the PocketCHIP is a full Linux computer, I installed git to pull my Jekyll blog down from Github. Installing Git was easy enough, but because I use two-factor auth I had to go the longer route of adding my PocketCHIP’s ssh-key to Github. Once authenticated, I was able to pull my blog down with a git clone. 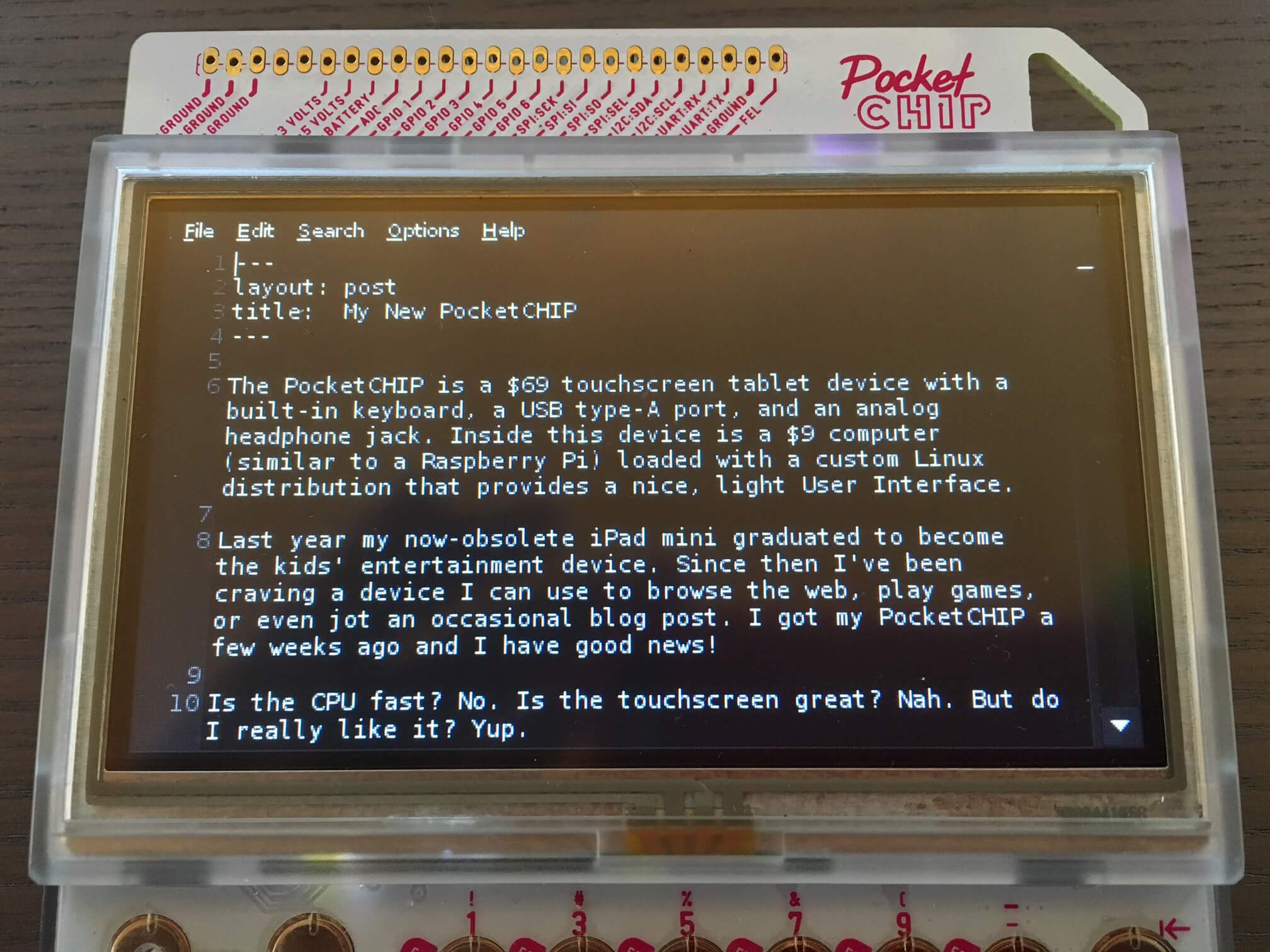 Now I have my actual _drafts/ folder on my PocketCHIP. I can edit them in the Write app then commit and push changes up. For me this is better than saving to some phantom iCloud or Dropbox folder. I like to add imagery and do final edits on my desktop, but there’s no reason I couldn’t install Ruby and Jekyll and publish straight from the PocketCHIP. It would probably just be very slow to compile.

The PocketCHIP gets me one step closer to the mythical blogging machine I have in my head and for that I love it.

My first “custom mod” was to the keyboard. The tactileness of the keyboard isn’t great and I was mis-keying a lot. So I stole some sticky rhinestones from my daughter and bedazzled the keyboard! 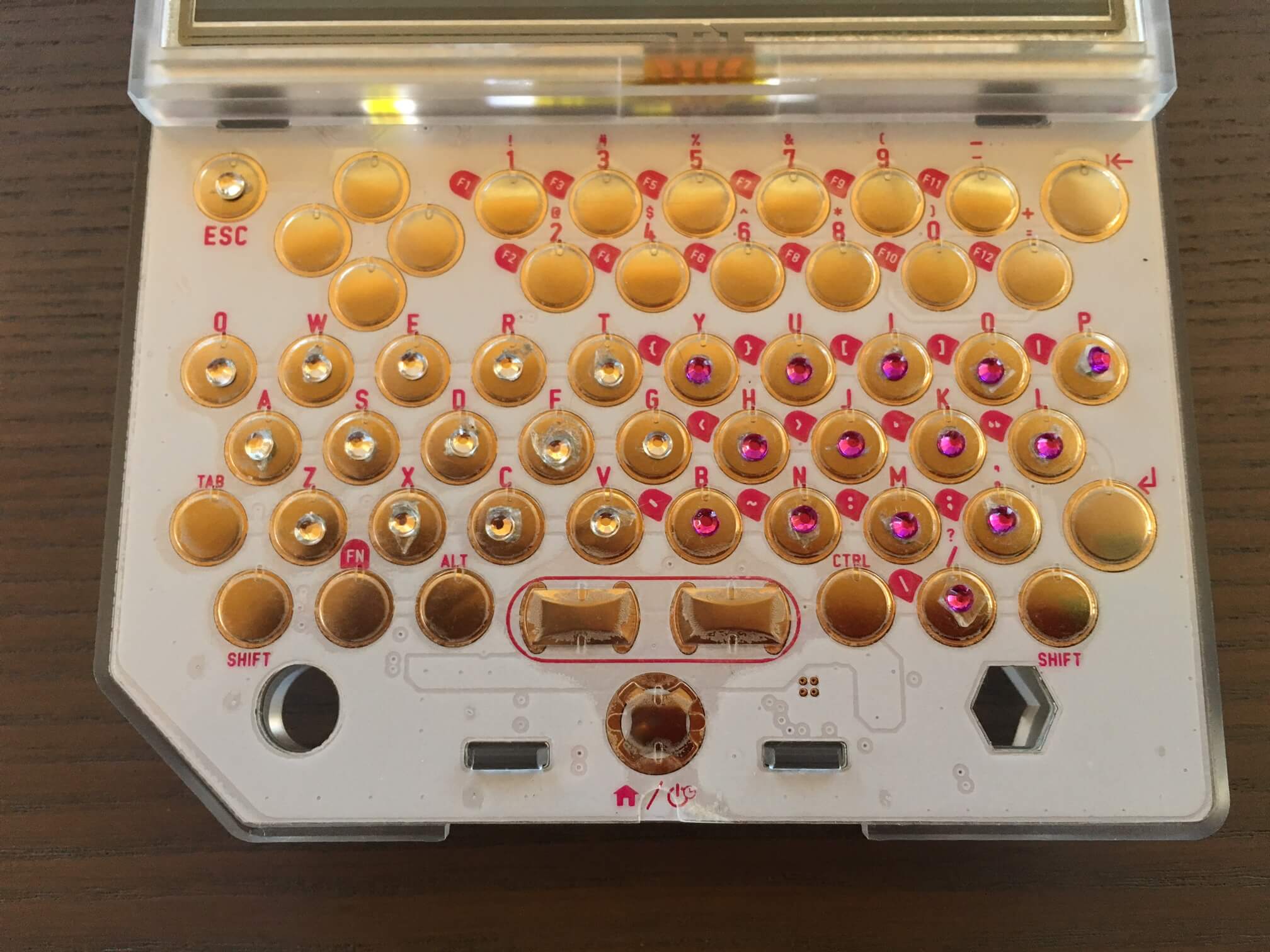 It’s not world-changing, but this glam-hack improved my typing experience by making keypresses more exact (and a bit more painful). Sadly the jewels are starting slip off. My next mod will probably be a cool 3D printed keyboard.

This is a very fun device and I’m just cracking the surface. I feel like it meets the needs of a “couch computing” device for more technical people. No OS limitations. No proprietary lock-in. Just good old fashioned open source on simple, customizable hardware without a hefty pricetag.