In October my family took a trip to Disneyland. I couldn’t help but be infected by the magic of Disneyland that allows you to feel young at heart and compells you to wear mouse ears on your head. Walking mile after mile through the park it’s very clear this magic has been painstakingly created and preserved by paying the utmost attention to detail.1

There’s magic in paying attention to detail, it’s the slight of hand that helps seamlessly preserve the illusion. At Disney, not only is the illusion preserved, you’re encouraged to take part through cosplay and interacting with your favorite characters. This makes you not just an observer, but also a participant in the ritual.

After walking past countless super heroes, princesses, and mice (and whatever Goofy is), something else stood out to me that sparked my product development brain. But first let’s take a step back to when Walt Disney first presented his business plan… 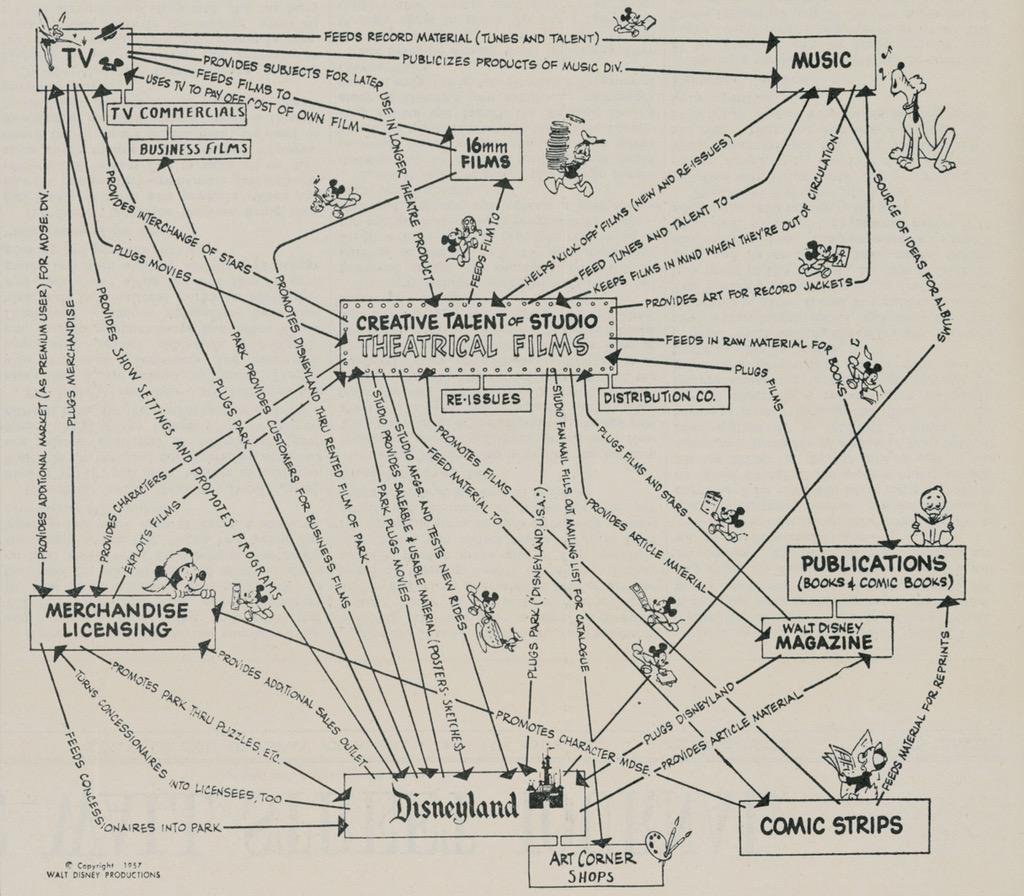 Walt Disney didn’t want to just make cartoons, he wanted to create multiple monetization streams. It was a bold move that had never been done before with cartoons. Each of these business pillars shared one common element: the characters of the films.

Walking around Disney you can experience all of these beloved characters street by street, film by film, decade by decade. You get a sense that if Disney is a “product”, then the characters are the features.

However, this machine is a hungry machine and requires an endless stream of features to power it. Maintaining interest over time allows Disney to keep mining new generations of fans, adding to its arsenal. I heard this quote from Michael Eisner in the documentary Waking Sleeping Beauty about the ressurection of Disney Animation in the late 80s and early 90s:

Under this light, the somewhat recent acquisitions of Pixar, Marvel, and Lucasfilm’s Star Wars make even more sense. Importing whole universes of characters is easier than creating new ones. Disney needs more characters for its machine.

This is somewhat counter-cultural to software-based product development where every feature ends up becoming a mountain of technical debt. Or those tech acquisitions that give you a lump in your throat because you’ve seen similar products you love ruined and shuttered. But maybe I’m a little too reactionary here. Maybe I need to be more accepting of new features. Maybe acquisitions are a good thing, a stepping stone to creating something great. Or maybe scaling features only works if they’re bundled into separate “apps” or “films”. This gives me a lot to think about.

Looking at Disney as a successful model for multi-feature creative products, maybe my hot-take University of Twitter MBA reactions aren’t really how 100 year businesses are made.

Since my trip to Disneyland, I’ve become obsessed with learning about how large-scale creative products are made and what the Web can learn from industries outside itself (e.g., movies, animation, video games). Are there parallels? How are they built? What made them successful? What caused them to fail? What can we adopt and learn?

This is the creative fuel for my next year.