The tale of a parody bug report that grew and grew. 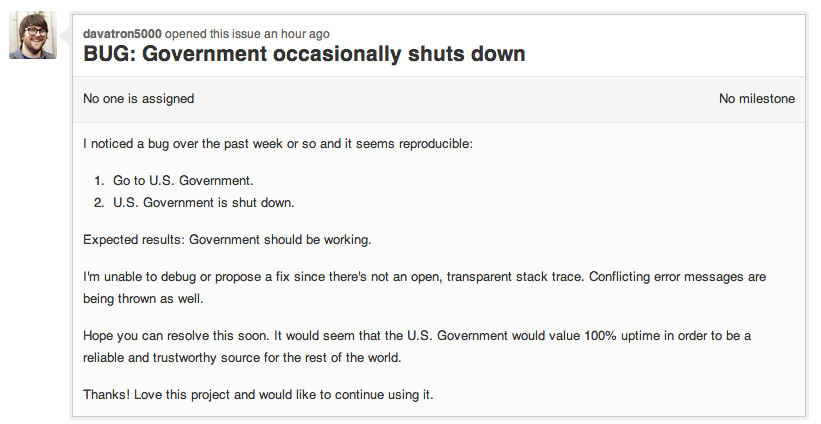 On Wednesday morning1 I filed a bug report with the White House’s Github. That little issue made the rounds and has spawned 640+ pun-filled comments. Even though the government is still shut down and that issue still open, I wanted to share some postmortem’y thoughts.

Is an Open Source Government possible?

I now wonder what our government would look like if a team of designers and engineers (as opposed to lawyers and politicians) approached the problems that face our country. Lawmaking seems to be about arguing your way to the top. Design and engineering is about finding better solutions.

What if political issues were technical issues and seen in terms of feature requests, available resources, lines of code, performance & security concerns, and all centered around agile data-driven decisions? Our decision process could go from “I AM THE LOUDEST MOST IMMUTABLE PERSON HERE” to “Shit. We really gotta figure this out.”

In lieu of favor-based legislation, bills could be collections of self-documenting features described like Cucumber tests. Instead of sweeping reform every four-to-eight years, maybe it’s Congress’ job to A/B test rollouts to 2~5% of the population for a two year sprint to see if programs are viable. Maybe it’s as simple as only upstreaming ideas that have been successful in multiple, diverse state governments?

I don’t have any answers, just thoughts so I’ll leave it at that. What are your thoughts?