Paper news is heading the way of the cassette tape. It used to be the primary method of distribution, but it has been made obsolete by faster, smaller, more portable forms of news. Waking up and reading the paper will soon be replaced by grabbing your Apple iTablet from your kitchen table, powering it on, taking it to the bathroom, to the living room for a cup of coffee, and then with you as you head out the door to work.

In this, the Dawn of the E-reader, few news agencies are taking action to balance this shift and will be stomped by the upcoming change or at the very least will be painfully out of date. NPR and the New York Times are two “old world” news agencies that are embracing the “new world” distribution method and doing well at it.

The Future of Distribution: NPR

National Public Radio, created in 1970, brings news to the airwaves. Though it may seem futile to look at a radio station as a beacon to guide us into the future, NPR is superseding larger privately funded news organizations in the digital space race. NPR latched on to 2005’s “Year of the Podcast”[1] buzz, and it appears has revolutionized the way they distribute content.

 The secret to NPR’s new strategy is tucked into the footer of it’s brand new (and dead sexy) website. Near the bottom, there’s a list of their on demand “broadcasts”:

They have fully understood themselves as a “broadcast” agency. Rather than sticking to their former pre-Internet glory days where they were the “Kings of Talk Radio”, NPR has changed directions. They’ve positioned themselves to say, “We will be in your email, your iPod, your phone, your RSS News Reader, your iGoogle and Blogs, your Facebook applications, and even on your Radio waves.”

They have a distribution model that fits the future. To be on every device that you may possible own. They’re on your iPod, your computer, and in your car. And with strong APIs, they will continue to be on the next big device. You cannot escape them. And they are dependable. 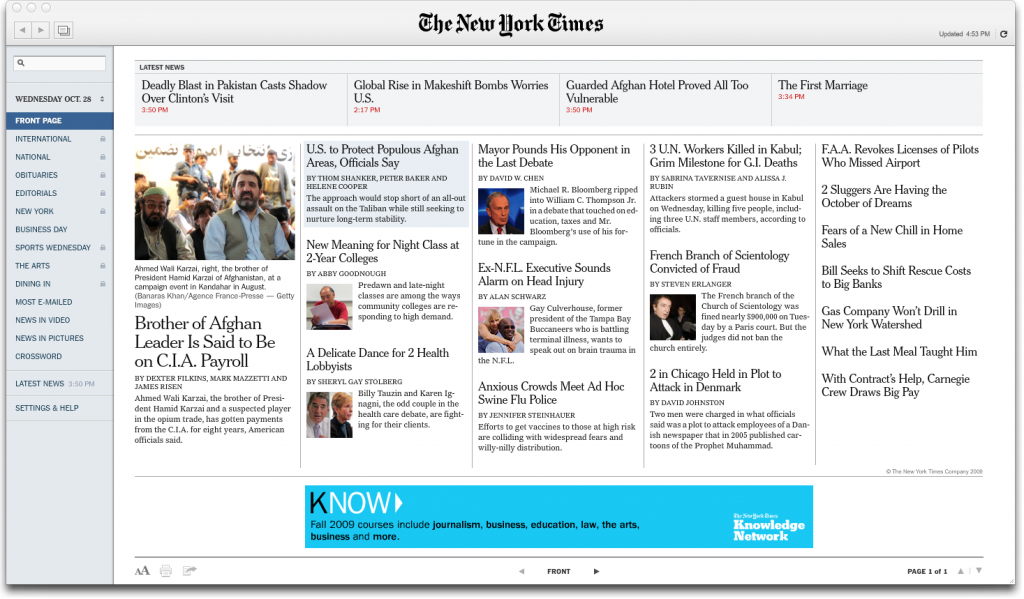 The Future of Distribution: Times Reader from NYTimes

The New York Times has an elegant Adobe Air application available right now for download at http://timesreader.nytimes.com. Once installed, you’re introduced to a drop dead gorgeous facsimile of the NYTimes paper version. The layout is beautiful, resolution-adaptive and interactive.

Times Reader has taken all the new digital inventions of the web and put them in to what will no doubt be the future of newspapers. A Latest News section, brings you breaking up-to-date news. Zoomable photos and micro-galleries can be embedded into every article. A whole section for News in Pictures. News in Video which is a medium impossible for print. As well as access to the previous six editions of the paper, which means no more trips to the garage!

The application is only in its infancy and you may not agree with the Times’ more liberal point of view, but if you are in the web or print design business, this is definitely a Must Download. It’s one of the forerunners that is beginning to bridge (repair?) the gap between web and print.

The Future of Income: Subscriptions

On the Times Reader you can see by the screenshot that some sections are “locked”, as denoted by an icon. You can catch a glimpse the sections, but are unable to click through to read more articles. A subscription of $3.45/week (less than 50¢/day) grants you access. If you were to ask me to spend $179.40/year on a website or newspaper, I would laugh and scoff in your face. Repackage that and turn it into $3.45/week for dependable news that I can read on my iPhone or iTablet (or whatever Apple calls it), then we have a conversational starting point.

This is not a new model of revenue. But it’s a turn from the “Freemium” ad-based business model that has exploded over the web. “Everything is free!” is ultimately a flawed business philosophy. Out of necessity, you either begin to overburden your users with advertising or you charge for things that otherwise used to be free, and that will eventually lose users[2].

These subscription based services for unlocking content (am I talking about XBOX?) will eventually be the norm. And it just might work. Loyalists who want the brand to continue, will support it, because they’ve extended themselves to be on the devices you love, and to do it well. Whether it’s Amazon’s Kindle or the upcoming iTablet, the NYTimes, like NPR, wants to be in your hands and being first to the gate with a method of digital distribution that appears sustainable is a huge gain.

The Future of Income: User-Supported

NPR takes a different approach to subscriptions. As listeners well know, NPR holds pledge drives every few months and strikes fear into its listeners that “Without your support, we can’t operate.” This fear, loyalty, ransom, or whatever you want to call it works. People will pay for what they love.

Though NPR is government funded, that only accounts for about 2% of its budget[3]. NPR is listener supported. It’s actual budget is determined by radio listeners, foundations, and handful corporate sponsors.

What NPR has done by its distribution method is that its now on every device, and you subconsciously need it there. They’ve beat your local TV news station to your phone.

It seems harsh and obvious and I’m repeating myself over and over. But this is happening. The internet has revolutionized the way we do everything and it’s just a adolescent teen. As Gary Vaynerchuck (currently #2 on the New York Times Bestseller list) would say, “The internet as we know it. The one where AOL would mail discs to your house, is only 14 years old.”

Ultimately, some will defend newspapers like they do cassette tapes. They’ll look on them with nostalgia and shout “I love it when they melt in my car!” But news doesn’t enter our houses via the doorstep anymore, it comes through the cable modem.